The Life of a Birder

LandTrust is the recreation access network that connects landowners to outdoor enthusiasts looking for higher quality experiences. In the process, we are working on opening millions of acres of private land for people to explore. Our recreators range from hunters/sportsmen and fishermen to wildlife photographers and mushroom foragers. Most recently, we have introduced birding to our network.

Miles and miles of rolling green hills as far as the eye can see; the wide-open space of a working cattle ranch could seem rather monotonous at first glance. Cattle grazing in a field with not much else on their agenda other than to continue eating. However, if one were to zoom in on a 10,000 acre ranch in the heart of Nebraska, they would see that there’s much more to this wild habitat than first meets the eye. Deer are stalking in the distance, taking advantage of the lush green grass to eat. Prairie chickens are popping up to say hello, while waterfowl flock on the pothole prairie ponds. Fish are dancing in the nearby lake as they feed on minnows and small insects. Meanwhile, those cows are back in the field, swishing their tails back and forth to the rhythm of a bird call in the distance.

Nebraska is the underdog pick of the year for turkey, waterfowl and upland.

Nebraska sits at the heart of our country. To most travelers, Nebraska might be considered a ‘flyover’ state as they bounce from coast to coast. From the Appalachian Mountains to the Rocky Mountains, the serene corn fields and majestic sandhills appear to be desolate as one looks out their window from an airplane. 430 miles across a sleepy and tranquil state, little does the onlooker realize the hum of activity happening below. Turns out this flyover state fills the same purpose for most bird species as they migrate during shoulder seasons. The difference is that these birds stop to take in the view from the ground.

Nebraska encompasses the prairies of the Great Plains, the towering dunes of the Sandhills, lush river bottoms that flow into the Missouri, and the panhandle’s dramatic rock formations. This diverse collection of terrain has allowed the whitetail population to boom in recent decades, however, it wasn’t always that way. Due to unlimited hunting in Nebraska, deer were nearly extinct by 1900. The Nebraska Legislature passed a law prohibiting the hunting of deer in 1907, but recovery took decades. It wasn’t until 1945 that the first modern deer season began with a harvest of 275 mule deer and two white-tailed deer. Over half a century later, whitetail deer have taken over and are now found in abundance statewide!

Why Nebraska is the hunting destination trip you didn’t know you needed.

LandTrust is excited to partner with GoWild.

GoWild is a free social media community and gear platform for outdoor enthusiasts. The team discusses the best gear, new tactics, and is always learning.

Did you know that in Nebraska, you can buy an over-the-counter rifle mule deer tag as a non-resident? There are plenty of other states that offer OTC archery mule deer tags, but these states follow the trend of crowded public lands and don’t provide the variety of hunting options you might be looking for.

Landowners are talking about recreation as the new crop and LandTrust is proving there’s a simple way to tap into this additional income. Listing your land on LandTrust connects landowners to the recreation access network. Millions of outdoor enthusiasts are looking for opportunities to explore private land for their favorite activities such as photography, hunting, birding, fishing and more! LandTrust is working on expanding access nationwide, but currently focusing on growth in the central region in states such as Nebraska and Kansas. We are very excited to announce our partnership with the Kansas Farm Bureau as we grow throughout the grain belt! 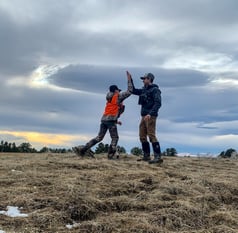 For Sportsmen of all ages and experience levels, a safe and quiet place to hunt is important. Competing against the orange army on public land during the season is frustrating and dangerous at times.  The National Deer Association, which educates thousands of new hunters each year, emphasizes safety during hunting training and makes sure its members are knowledgeable and protected. They prioritize this and look for partners that can help support this mission. That is why they recently partnered with LandTrust.

Last week, we introduced Ches Meyer as one of our proud LandTrust Landowners. Ches took us through his journey of signing up as a landowner: the skepticism, the reassuring and then the reward that he and his family experienced in doing so. However, Ches’s direct relationship with LandTrust did not end once he signed up. In fact, Ches has continued to work very closely with the LandTrust team every day. In particular, with Mike Ryan.

We've never had a bad hunter!  It’s been great to connect with sportsmen who want to come out here. We’ve been blessed with hunters who want to take care and pride in...

Thank you to all our landowners who have generously been providing feedback to make LandTrust better for everyone. Today, we are introducing a whole new way for landowners to see the revenue you’ve earned on LandTrust and much more. Earned, expected, and even potential revenue from sportsman inquiries are now visible in your personalized landowner dashboard! Landowners are the foundation of what makes LandTrust unique. We think this new dashboard will make it easier for you to manage inquiries as well as learn helpful tips to get more bookings. A full breakdown of the new landowner dashboard is below.